Staying in Boutique Hotel Kokkino Spiti, explore the highways and byways of Veroia and the wider area!

Day 1: Start your day by visiting the archaeological sites of Vergina– the ancient city of Aigai. You will be enchanted by the royal Macedonian tombs and especially by the tomb of King Philip, father of Alexander the Great, just 12km from Veroia.

Day 2: Devote time exploring the town of Veroia and learn the history behind its culture and monuments. Visit the Byzantine Museum, which is housed in a renovated industrial building from the beginning of the 20th century, in Kyriotissa, the heritage quarter of the town. Don’t forget to admire the picturesque narrow streets of Veroia.

Make a stop at the Archaeological Museum of the town, which hosts the biggest head of Medusa that has ever been found in Greek territory. Stroll through the beautiful Jewish section of the town, Mparmpouta, by the bank of river Tripotamos that fortifies the neighborhood at one side of the district. Visit the Jewish Synagogue and the point where Saint Paul preached, always going on foot, starting from Kokkino Spiti!

Day 3: 16km from Veroia, you can find Aristoteles’s School. At this spot, the ancient Greek Philosopher, taught Alexander the Great, the greatest commander of all times! Continue your exploration in the town of Naousa, taste the sour red wine and drink your coffee by the river Arapitsa, in the woodland of Agios Nikolaos.

Day 4: The time has come to visit Pella! The first capital of Macedonia– in the times of Alexander the Great- hosts a new museum and an outstanding archaeological site, 40km from Veroia. After your trip to Pella, it’s time for Edessa and the breathtaking waterfalls!

Day 5: You will meet Dion 45km towards Katerini. Dion is the holy city of the ancient Macedonians, on the roots of mountain Olympus, the place where the Greek Gods lived. At this spot the Macedonians have built a spectacular shrine dedicated to Zeus and it was the beginning of a big city. The north foothills of the mountain hide natural and cultural memorials. 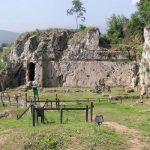 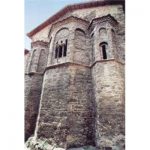 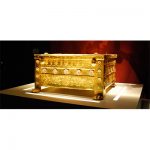 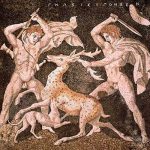 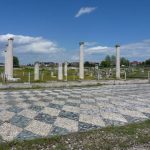