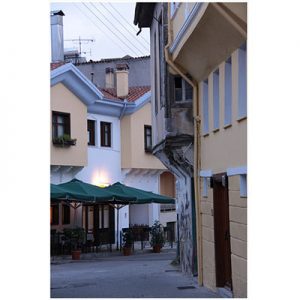 13km from Vergina, you will find the picturesque Veria, the capital of Imathia County!

Every visitor will have the opportunity to experience a journey through time, due to the 8.000 year old remains, the senior Neolithic settlement of Europe and the historic figures! In Veroia and the wider area, in the heart of Macedonia, the history’s greats were born, figures who influenced the world’s history.

Vergina or Aigai-by the ancient name- keeps under wraps magnificent findings, such as the royal palace and the royal tombs, where the memorial of Philip the 2nd, father of Alexander the Great, was found. This is the same place that Dimitrios Vikelas, the first president of the Olympic committee, was raised.

You will definitely gaze in awe by the ancient Roman Egnatia Road, the way that will lead you straight to the point where Saint Paul preached, which is a universal religious monument.

Veroia is known for its religious character, due to the 48 temples of the town and this is the reason why is called “little Jerusalem”. The Byzantine Museum will gain your interest and the Jewish area, where the Jewish Synagogue is located, is going to take your breath away.

Veroia was the commercial and cultural track of the 16th century, as a result of the coexistence of Greeks, Jews and Turks. River Aliakmonas is splitting Pieria Mountains from Vermio and the agricultural flatland is full of colors and scents! Sumela Monastery, the ski resorts, the world-renowned Public Library of Veroia, the peaceful coexistence of different populations and the historic past, have rendered the town as one of the most popular vacation spots in Greece.