Take a trip to Vergina, a small town in the heart of Macedonia, with the renowned history!

Vergina is located in Imathia County, 13km southeast of Veroia, the capital of the county and 80km. from Thessaloniki! Vergina was named by Konstantinos the 2nd, the Archbishop of Veroia, in 1923, as a tribute to Queen Vergina, the last Greek potentate, before the fall of Veroia from the Ottomans in 1433.

Vergina was built at the foothills of Pieria Mountains, where the ancient Aigai, capital of Macedonia situated in the past. Up until 1977, the small town was keeping under wraps, an important secret, the royal tombs of the Macedonians. Among other findings, the academic excavation of the Aristotle University of Thessaloniki, led by Manolis Andronikos, professor of archaeology, encountered the royal tomb belonging to King Philip the 2nd, father of Alexander the Great.

People all over the world recognize the Sun of Vergina, the symbol on the golden shrine, in which the remains of Philip’s body were found. It’s a sixteen sun’s ray’s star, which became the symbol of modern Greek Macedonia. 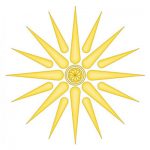 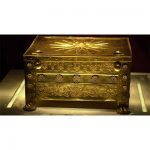